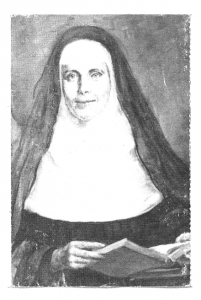 Venerable Catherine McAuley, foundress of the Sisters of Mercy 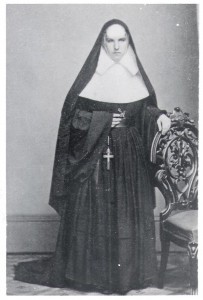 3. Hymn To The Holy Name

5. Jesus, Keep Me Close To Thee

8. My Soul Doth Long For Thee

9. Evening Hymn To Our Lady

12. Hail Thou Ever Blessed Morn

15. To Him Who For Our Sins Was Slain

In presenting Volume II of Our Lady of Mercy Hymnal, our fervent prayer is that it may draw the hearts of our children to know the tenderness of Our Blessed Mother’s love, that love which all must possess who would enter into the Sacred Heart of Mary’s Divine Son, Jesus Our Lord.

It is known that the hymns of Mother Alexis were widely used among parish choirs and Catholic school children in the Diocese of Providence and Fall River as well as throughout the United States since her music had such great appeal. Several widely used hymnals used selections from the works of Mother Alexis in their contents. The preface of most popular Catholic hymnal in the United States for the first half of the 20th century, St. Basil’s Hymnal, states, “For permission to use copyright tunes we are indebted to the proprietors of the…Our Lady of Mercy Hymnal.” Another popular hymnal, The Mount Mary Hymnal, compiled by a School Sister of Notre Dame of Milwaukee, contains Mother Alexis’, “Jesus, Keep Me Close to Thee.” Appropriately, this hymn, which was the favorite of Mother Alexis herself, was sung at her funeral Mass at SS. Peter and Paul Cathedral, Providence, in 1936. The hymn’s refrain, “All through life and at its closing, Jesus, keep me close to Thee,” is especially suitable as someone enters eternal life.
Prior to Vatican II, it was common practice in religious institutes to refrain from using specific names of vowed men and women in their published works. Therefore, with one exception, no reference can be found to the actual composer of these hymns, Sister (Mother) Mary Alexis Donnelly. Anonymity is assured through references such as “By a Member of the Order of Mercy,” “S. of M.” or “Words and Music by Sisters of Mercy.” The one exception is a full-page advertisement for “English Hymns by a Sister of Mercy” on the last page of The Standard Catholic Hymnal, published by McLaughlin & Reilly in 1921, a popular hymnal which contains Mother Alexis’ “Hail Virgin of Virgins” and “Jesus, Keep Me Close to Thee.” The nine “hymn pamphlets” listed earlier are included in the advertisement, with prices ranging from eight to twelve cents each. For No. 27, “Lead Kindly Light,” “Sr. Alexis” is listed next to the name of the hymn.
We know, therefore, that Mother Alexis was, in fact, the composer of the melodies for all of the hymns that have been referenced in these publications. But did she, too, write the words for these hymns? Many of the words to the hymns Mother Alexis set to her own melodies were authored by well-known Catholic writers of the 19th century including Fathers Frederick Faber (e.g., “Jesus, My Lord, My God, My All;” “Dear Little One;” etc.) and Edward Caswall (e.g., “Hail, Thou Ever Blessed Morn;” “This is the Image of Our Queen”), both converts and contemporaries of recently canonized John Cardinal Newman in the Oxford Movement, as well as Eleanor C. Donnelly (“O Virgin Mother, Lady of Good Counsel;” “O Sacred Heart, O Sacred Heart, So Humble and So Meek”). For many other hymns, such as the favorite of school children during the May procession, “Again, We Greet Our Mother,” the caption indicates “Words and Music by Sisters of Mercy.” So, did Mother Alexis, in addition to writing the music for these hymns, also compose their words? This caption, with the plural used for Sisters, seems to indicate that the words may have been composed by other Sisters, although this information shall forever remain unknown, with one exception. This exception is the last hymn composed by Mother Alexis, “For All Rhode Island’s Sons,” which was a poem authored by Sister Mary Louise O’Brien, for the tercentenary of the State of Rhode Island (1936).
Mother Alexis’ dying request was that her hymns continue to be promulgated; many have attempted to do this even in contemporary times. In 1990 “Mercy’s Music Heritage,” a cassette consisting of 18 hymns composed by Mother Alexis, was recorded by the renowned Dorian Concert Choir of Providence under the direction of the late Jon Carew. The hymns have since been made available by the producer in CD format and may be obtained by emailing the author at pmeggison@aol.com. In addition, these hymns, as well as others, may be heard on the web at this site, www.catholicdevotionalhymns.com. A second volume of “Mercy’s Music Heritage” is currently in the formative stages and will be available later in 2014. This edition will be sung by various choirs and performers.
We do not deny that the words to many of the hymns Mother Alexis composed speak of another age—a simpler, less sophisticated time perhaps. Yet, the hymns still can speak to anyone brought up with them or anyone else who would care to listen since these are the people Mother Alexis served and loved during her lifetime. And, by her song, we remember this great composer for her humble, fervent, sincere, and selfless life which was surrounded by an atmosphere of leadership and inspiration for the good.
–Peter Meggison